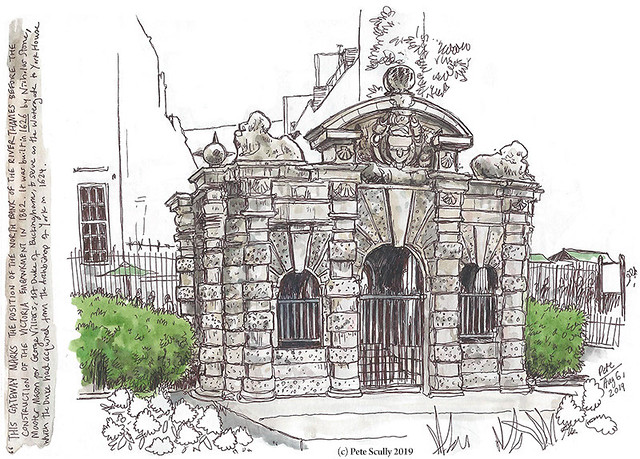 After a couple of weeks city-hopping the low countries of Europe, we Eurostarred it under the channel to fellow-EU-country-at-the-time UK for a week of family time before flying back to America. Seems like a Golden Age Of Travel now. That week was interesting, in an Interesting Times kind of way, but there were some highlights, like going to the new Spurs stadium to watch Tottenham v Inter (sure we lost on penalties, but I got that beer that pours from the bottom of the plastic glass). I did manage a few sketches that week though. Above, this is the York Water Gate found down in Victoria Embankment Gardens, by the Thames. This gateway dates from 1626 and if you turn your head sideways, you can read what I wrote about it, copied from a plaque. I used to like coming to these gardens to read and study when I was doing my master’s many years ago. There were a few dodgy characters lurking around, on the prowl for picking pockets. I social distanced myself from everyone even back then. Still it was nice to be back in London, on a warm early evening, down by the river. I like it by the river. 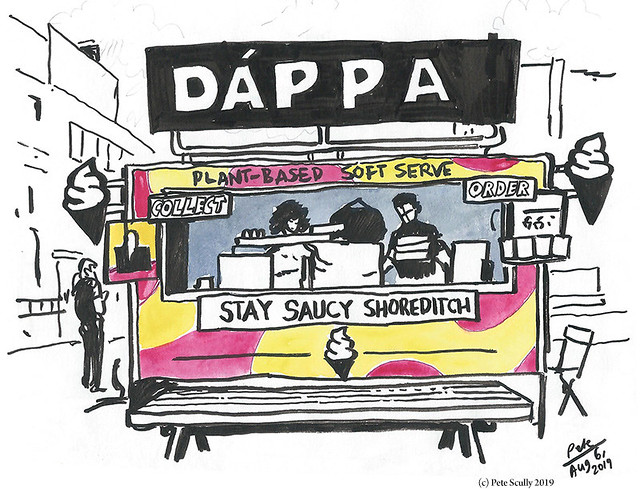 Earlier that day we had been to Brick Lane to visit the Classic Football Shirts shop, one of my favourite places of course. My son picked up a youth size 1994 navy Spurs away kit, quite a find. I actually bought that same shirt (adult size) on the day it was released, I was only 18, and it still fits. I wore it when I met Jurgen Klinsmann at his first training Spurs session in Mill Hill, where our old training ground used to be, near Copthall Swimming Pool. I met a few other legends that day, Sheringham, Barmby, Mabbutt, Anderton, Ian Walker, even Rony Rosenthal. But best of all of course was my long time hero Ossie Ardiles. What a gent. He even waved to me from his car when he drove past me and my sister walking down Bunns Lane. Look when I was six I used to want to BE Ossie Ardiles, that was my ambition when I grew up, to somehow be him. Anyway I digress. We ate at some food trucks (I got some tasty fried chicken and chips at a little truck called Mother Clucker), and I drew this ice-cream van above, Dappa. 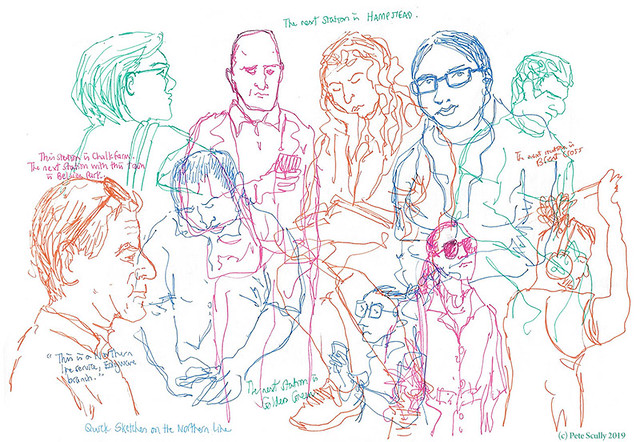 Let’s call this one “Before Social Distancing”. We’ve never been social on the tube anyway. I drew these quickly with different pens while on a packed Northern Line carriage back to Burnt Oak. I always get very sleepy on the tube. 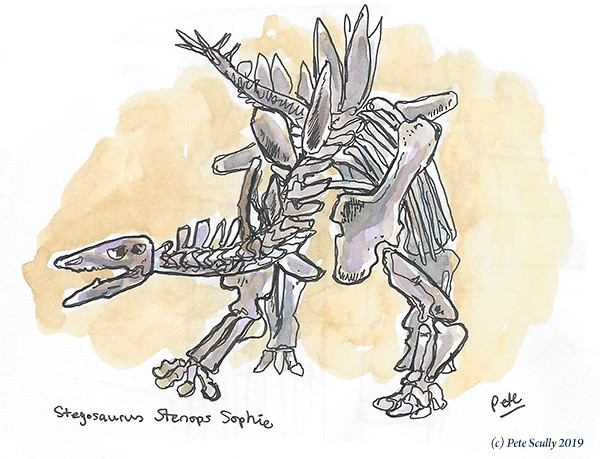 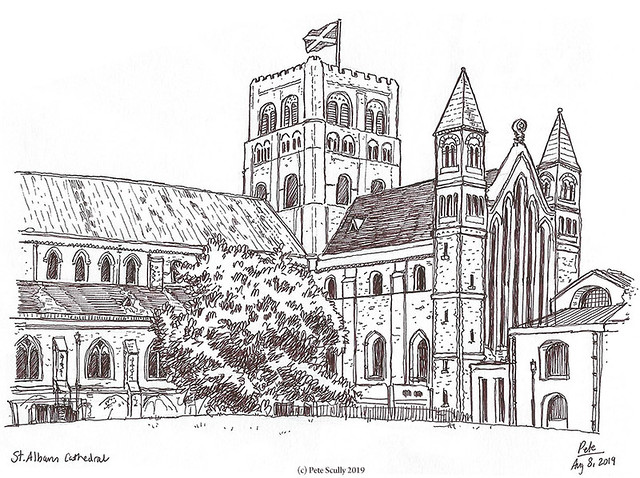 We went to St Albans with my mum, and had a look at the cathedral there. I also joined one evening the London Urban Sketchers for a sketchcrawl down the banks of the Thames. After a busy day, I ended up down near London Bridge, I called my uncle Billy on his birthday. And then I met with the sketchers and drew them. There were great amazing vistas to behold, but this was a shirt summer evening sketchcrawl and I was done with architecture for now. It’ll be different next time I am back. So, I just sketched the sketchers. Here they are… 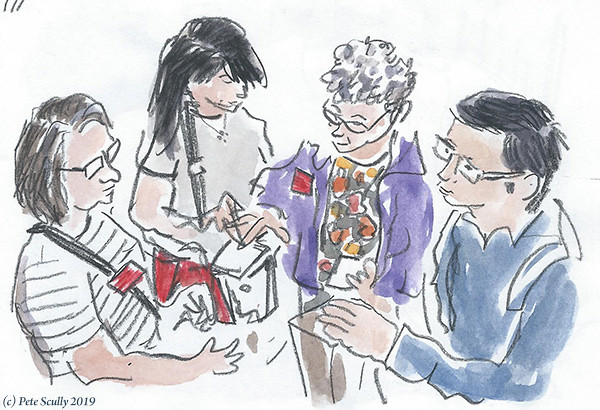 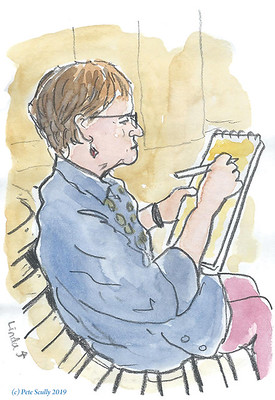 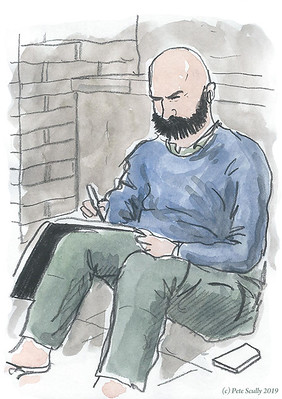 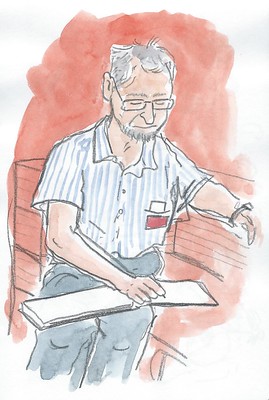 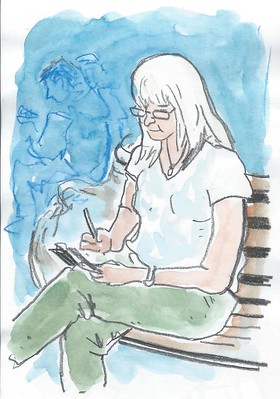 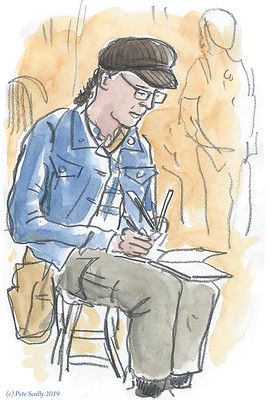 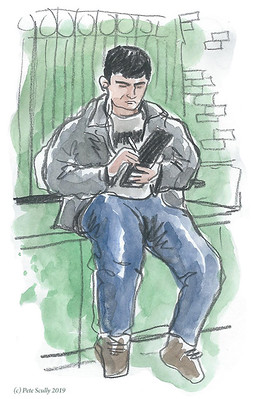 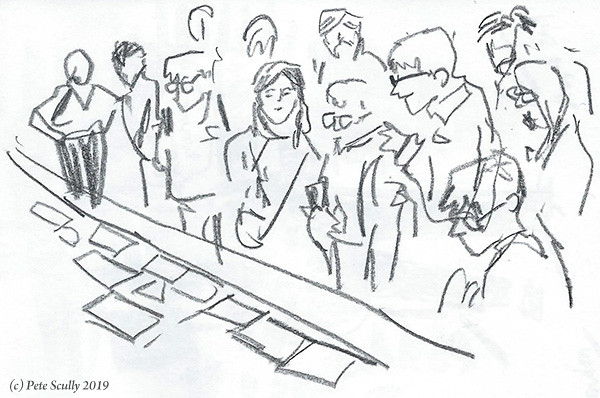 And then they laid out the sketchbooks as they do, and looked at them. They get large groups in London, I remember the very first Urban Sketchers London sketchcrawl in 2012, which I organized, called “Let’s Draw London”, we had a whopping number of over 50 participants, but that seems about average these days. I think the 2016 Wren crawl had around 70 or 80. It’s nice to come back and see familiar faces.
After that I met up with my friend Roshan (who I’ve been mates with since late teenage years) and we hung out on the South Bank for the rest of the evening, I sketched some singers who were performing at a pop-up bar by the river. 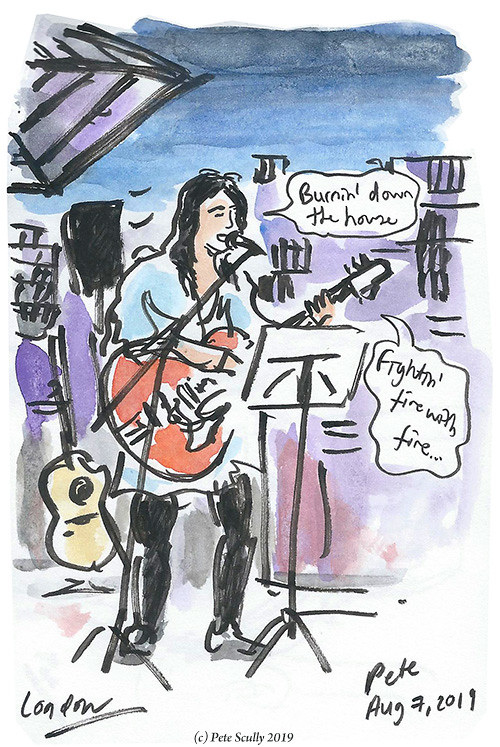 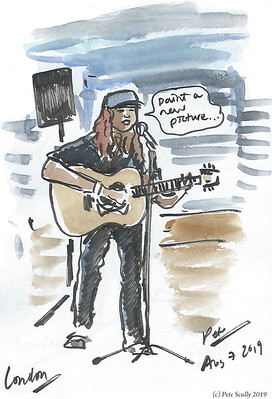 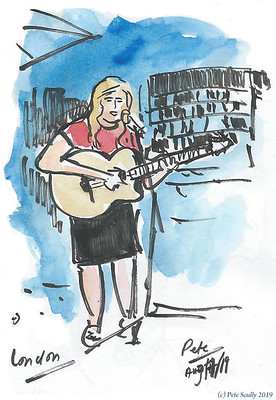 And that is that. At the end of the trip we flew back home to America (see the in-flight sketch below) and got back to work, and the credit card bill. That was a long trip. I’m still not completely recovered! But I have been back to London since then. 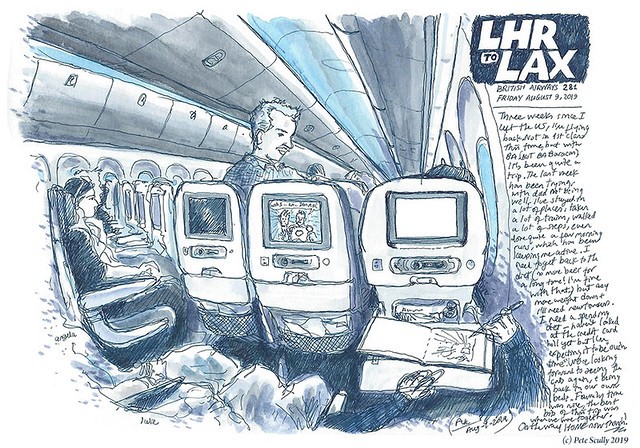 Continuing the theme of Roman and Saxon England, here is the impressive Cathedral at St. Albans, in Hertfordshire, just outside London. St. Albans is a lovely little city (and despite its size it is a city, not a mere town – it has a cathedral, so it’s a city), which despite being pretty close by to where I grew up in Burnt Oak, north London, I have only been to twice, this being the second time. I came to see the amazing cathedral once again. Now once upon a time St.Albans was a Roman city called Verulamum, and it was in this city that a man called Alban was executed in the late third or early 4th century by those Romans who at the time were persecuting Christians. Alban’s head was cut off, and he subsequently became Britain’s first Christian martyr. “A what?” they all said at the time. Apparently when Alban’s head was chopped off the executioner’s eyes fell out, which seems a little far-fetched to me. I’m very cynical as you know. It is believed that the cathedral (formerly abbey) stands on the spot where St. Alban was beheaded, being established as a monastery by the Mercian King Offa (he of the Dyke) in the 8th century. He’s one of my favourite Anglo-Saxon kings, a contemporary of Charlemagne, and a very persuasive man; as they said at the time he was “an Offa you can’t refuse”.

After exploring inside, we sat out in the sunshine, and my family patiently waited while I sketched. It’s not every day I get to sketch cathedrals, especially ones like this.