I like my early morning wandering and sketching when we have family trips away, out by myself when the others are still sleeping. But I also enjoy the evening stroll as well, a good way to work off a long day’s walking and sightseeing. I’m just so keen to explore and to look, and of course to sketch. So much life was within walking distance of our apartment. I ambled over to Shakespeare and Company, the famous English bookstore by the Seine that everyone has heard of. We came by earlier, but didn’t go in because the line to enter was ridiculous. I’ve seen long lines to get into bookstores before; the Livraria Lello in Porto, for example, where you actually had to buy a ticket to go in, it’s that famous; bookstores everywhere on the night the last Harry Potter book came out; and of course, Faculty Books on the Middlesex University campus, where I used to work twenty years ago, there was always a line on the first day of term so people could get their massively overpriced Pearsons textbooks for their Econometrics class. the line for Shakespeare and Company, while moving, was too long for us to consider. It’s not like Shakespeare himself was in there signing copies of Much Ado About Nothing. No, it’s just a really famous bookshop. Loads of famous writers have been involved with this place. Loads of them. Loads. It’s not the same Shakespeare and Company that Hemingway and Joyce are associated with, but it’s named after it, and it’s really famous in its own right. I went back in the evening, knowing it would still be open, which it was, but there was still a long line outside. Well, I thought, perfect time for a sketch. I drew the panorama pretty quickly, and drew people even more quickly. The great thing about sketching people in line is that they will be there for a while, but because they don’t want to lose their spot you never get them coming up to you to see why you are sketching. Not that anyone would, this is Paris, it’s full of artists. I never got to go inside the store, as it closed up while I was finishing up the drawing, but I’ve been in before. I think it was in about 1999, one evening down by the river, came across this shop, there was no line outside in those days. It was interesting, in an old bookshop kind of way. I’m glad I got my sketch this time. I am a sucker for old bookshops, and for new bookshops too. I like the smell of certain French bookshops, very clean and tidy, with so many of those particular books with the white spines, and always with a huge BD (bande dessinee) section. 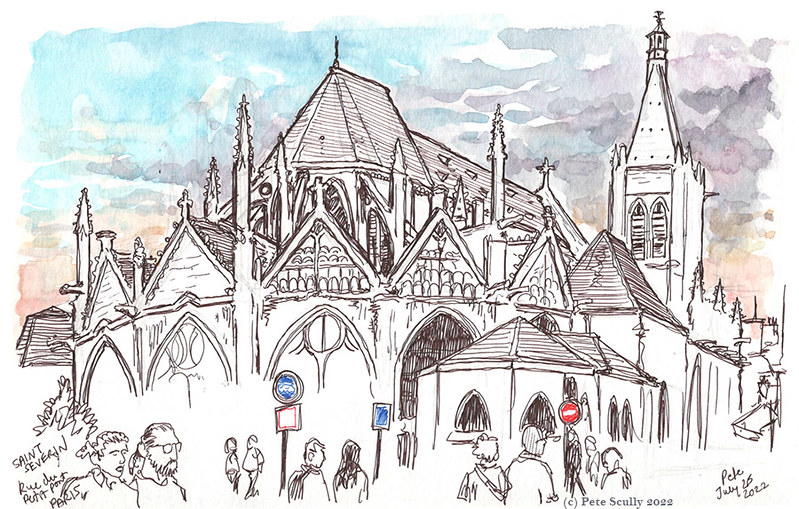 We were located very close to the church of Saint Séverin, and having passed by earlier in the day I earmarked that one for a sketch on my evening walk. I drew the rear (the apse) from the busy intersection where Rue Saint-Jacques joins up with the Rue du Petit Pont. The setting sky was cinematic. Restaurants buzzed with life. Nearby at a cafe a lady was belting out Edith Piaf tunes. One of those motorcycle delivery drivers nearly knocked someone over shortcutting up the pavement. It was like being in a movie, and just like being at a movie, I really needed the toilet so I went back to the apartment.

I loved our apartment for hanging out in. My son and I had our ukuleles on this trip, so I would sit by the window strumming to all the noise of the traffic. It was just like being in a Netflix show. Just like when I’m watching a Netflix show, eventually I left the room and did something else. I walked a bit further afield on this night, crossing the Seine twice and heading for the wonderful Hotel de Ville. I’m drawing the Hotel de Ville alright, I said to myself. I love the Hotel de Ville. I’ve always been impressed with it, but I especially love how the summer evening light hits it and appears to turn it different colours as the sun sets. Or at least I did before I tried to sketch it. Conscious of time, I decided to zoom my poor ageing eyes in to some details on part of the roof (it’s a really big building), and draw backwards as it were. I always add the colour last, this time I was like no, I am laying down this golden colour now. A lot of sketchers work this way and they love it, they say it’s the best and you should do it, but here’s the thing – no it’s not. At least not for me. I suppose the technique just doesn’t fit how I draw, or maybe my paints are often a bit dry so don’t always produce the most vibrant colours (I usually prefer the more toned down colours), or maybe I just tried to get the colour I saw and then it bloody changed into something else. The sunlight was slowly slowly oh wait now quickly fading, so I had to draw quickly. I still like it though, it’s a story in itself. It was nice out, people passed by and said “très jolie!” and “bellissimo!” and “das ist so cool!” and “hmm yeah that’s quite nice”. 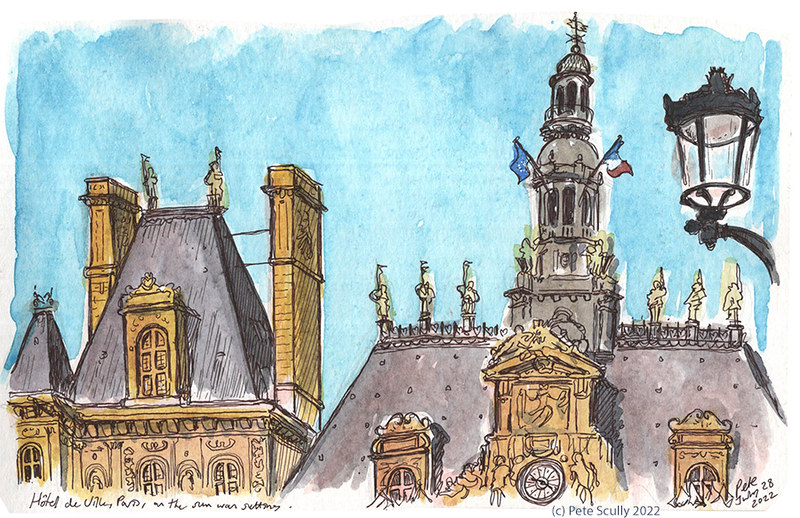 The Hotel de Ville holds one of my favourite memories of Paris though. In 1998, on the first night of my five-week twelve-country train-trip, after a day walking about Paris I went to the Place de l’Hotel de Ville to watch the World Cup Semi-Final on a big screen in a penned-off area with thousands of dancing Brazilians and chanting Dutch. Ronaldo’s Brazil up against Bergkamp’s Netherlands, being beamed up from the Velodrome in Marseille. I camped in with the Brazilians, of course they would be the most fun to spend this warm evening with. And the the game kicked off, and they were all very quiet, a bit nervous, none of the singing and samba I’d expected. I looked across to the Dutch fans, as you would expect it was a sea of orange, and they would not stop singing. They were having a great old time. The game was a bit tense, not a lot happening, so at half time I decided to switch sides and join the Dutch. The grass is always more orange I guess; a minute into the second half, Ronaldo scored for Brazil. Yet the Dutch kept on singing and having a great time, so I stuck with them. It was a long old second half too. It looked like a Brazil win; ok so, I had a night train to catch anyway from Gare de L’Est, heading to Strasbourg, I didn’t want to miss it. And then, shortly before full-time, Kluivert equalized for the Netherlands. The Place de l’Hotel de Ville erupted in a volcano or orange facepaint. We were going to extra time; I still had time to catch my train, yeah? The Dutch camp was the place to be, momentum was with them, and maybe this would not be Ronaldo’s World Cup after all? Looking anxiously at my watch, it went to penalties. For the Netherlands, it was not to be, as the Brazilian goalie Taffarel pulled off a couple of great saves. As soon as Brazil won, I immediately switched sides again and went back to the dancing samba party, a carnival of yellow wigs and plastic whistles. Everyone was hugging and dancing and cheering (well, not the Dutch I guess) but I didn’t have long to party, I dashed to the nearest Metro and just about made it to that last train to Alsace. This was 1998, Brazil were in the Final, this really was Ronaldo’s World Cup. (Narrator’s voice: it wasn’t). The next day I watched France beat Croatia, at my friend Roland’s house in Strasbourg, and Zidane and Company went on to beat Brazil 3-0 at the Stade de France.

Anyway with those memories in mind, I walked back to the apartment. A couple of nights before on the TV we had watched England women beat Sweden 4-0 in the semi-final of the Euros (they went on to win it of course!) and the night after, France were beaten by Germany. On this evening though we were just packing for our flight back to the US the next morning. this isn’t all my Paris sketching though, there’s one more post to come…