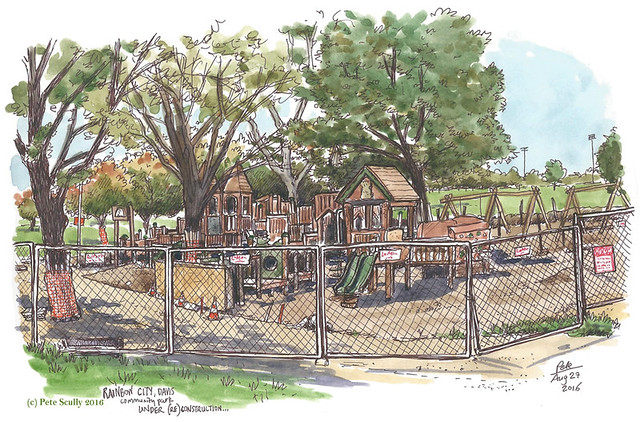 Last week we held our November 2011 ‘Let’s Draw Davis!’ sketchcrawl, up at Community Park. It was a pleasant Fall day (and I had not yet heard about the previous day’s pepper spray incident), Turkey Trotters were out running across Davis, the park was full of autumnal colours and temperatures were not too cold, at least not for the first hour or so (after which it started to get chilly). The regular Davis sketchers were joined by several new faces, mostly from Davis, but also one, Portland Urban Sketcher Linda Daily, whom I had met up in Portland at last year’s Symposium.

We started off by drawing around the Davis Art Center and the amazing wooden playground Rainbow City. It’s a completely community-built playground, one of the greater examples of epic community work in Davis. One of the other sketchers, Landon, told me that he in fact had helped make it when he was a child. There I am below sketching with the little Scully.

I sketched some people; still practising my people sketches. Below are (top row, left to right):  Allan Hollander from Davis (I’ve sketched Allan before a few times), Landon Christensen from Davis, Marlene Lee from Davis (another sketchcrawl regular). Bottom row, left to right, are: Salvador Castio from Stockton, Linda daily from Portland, and Jennica from Davis.

After some more park sketchng (I drew these old playground pieces; perhaps these used to be City and UCD fire hydrants in former lives, judging by their colours), we met up at the library, where we warmed up and chatted about sketching. I also showed off my library display. It’s so great to meet other sketchers, and see their books and their tools, and learn about their approach or reason for doing this. That’s the point of the sketchcrawls! And for me they’re always learning experiences.