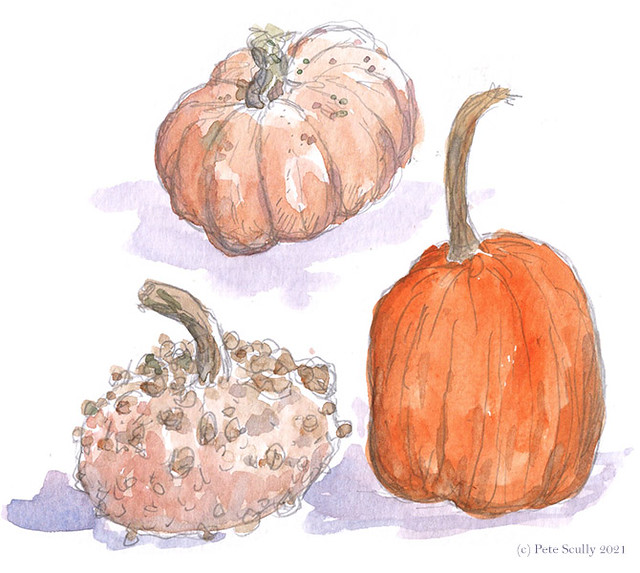 So, Happy Hallowe’en folks. I might be the only person in America who spells it with an apostrophe. That’s ok. This is the smaller of our two pumpkins, this is the baby one for my toddler son. He tries his best to say ‘Jack-a-Lantern’ but it comes out as ‘Gelarkajah!’ which is infinitely cuter.

So October is over. Not been my favourite October ever, but, you know. November begins tomorrow. I will not be attempting the NaNoWriMo novel writing challenge this year because it will be interrupted by a trip home to draw things in England. Shame because I have an idea for a story; maybe I’ll motivate myself to write it one day. Or maybe I’ll draw pumpkins.

My first week living in America, and I have tossed my first pumpkin.

It happened on Saturday, at the Sonoma County Harvest Fair, a gathering of wine-sipping apple-farming hicks which, a bit of a culture shock to a boy from Burnt Oak. Having tasted prize-winning Zinfandels and Chardonnays from all over the County, and chuckled at the hilarity that is the Wolrd Championship Grape Stomp, we put our names down to see who could chuck pumpkins the furthest. My wife chose a fairly small one, and managed to throw it an admirable ten feet; my one, on the other hand was huge. Now people had their methods – some threw it like an American Football, some held the tip and launched it, while one Chinese fellow tried to swing around and shot-put it and failed, managing a measly half a foot. I wanted to performs a footy-style throw in, but when my time came, I cannot even remember what I did. I did get a few claps though: I managed a very respectable eighteen and a half feet. Not bad for a beginner. I got a ribbon – next year I’m going for the trophy.

And so, we are finally back in the land of the huge car, the wide road, and the beating sun. After all of my emotional goodbyes, this first week has been one of conflicting feelings, a swim in a choppy cultural sea that has left me in need of a snorkel, or at least driving lessons. It is impossible to do anything here without a car. You have to get a car to go and get a car. There are freeways in even the smallest of towns because people do not like driving through the town, they would prefer to sit in traffic on a freeway than face a couple of stop signs. Fast food is everywhere – when you can’t be bothered going to the supermarket, it is a hugely easy option – nobody really wonders why everybody is fat here. I am living on doughnuts (or ‘donuts’, rather – they love to contract their words here, to leave more room for their Big Gulps), burritos and massive sodas. And uber-patriotism – only last night there was a country and western song on the radio that glorified invading other countries (particularly non-Christain ones) and raining hell-fire down upon them (“I’ll put mah boot in yaw ass”) so that we can be ‘free’, like we wouldn’t be free anyway (in fact, I wish we weren’t free to invade other countries willy-nilly sometimes, then they wouldn’t hate us so much).

Ah, it’s all an adjustment to a new way of life. People here are politically charged, be it uber-right or uber-left. If there were any more polarization they’d be throwing snowballs at each other. I’m going to sit back, listen, try not to start fights, and report it all here. This blog will now be my own ‘Letter from America’, and I’ll try to update every week.