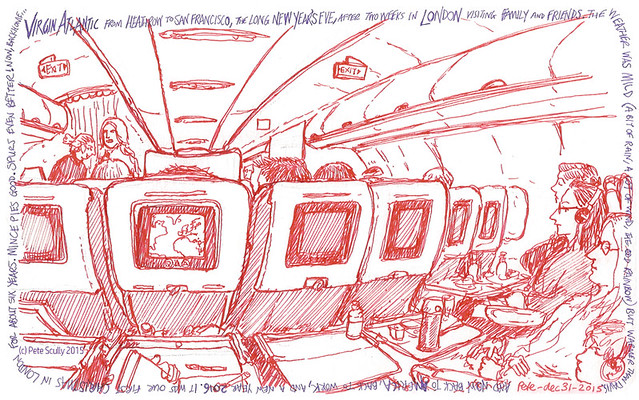 The flight back to California, new year’s eve. Last sketch of a very sketch-filled year.

Haven’t done too much sketching in 2016 yet though…

Happy New Year! I got back into Davis today, after two and a half weeks in snowy England. I’ve never seen a winter like it in London, but I still managed to do some sketching, though probably less than usual. The scanning and posting will be an ongoing process. Here’s a good place to start: my first and last sketches of the trip, both on BA jumbo jets, drawn in my Moleskine diary.

Here’s the thing: I hate flying. Not in a BA Baracas “fool aint gettin me in no plane sucker” way. I hate airports, the ever-decreasing baggage allowances,  packing suitcases, Heathrow, overhead lockers, the toilets, the engine noise, the fact it takes me two days to get over the ear-popping thing and I hate that sleeping on a plane is practically impossible. Flying is not my favourite thing, but it’s a necessary necessity. Carbon footprint my bottom.

Below is the sketch I did while waiting to leave London yesterday, New Year’s Eve. You can sense the dread.

And so it is a new year. In fact today is 1-1-11, which must be significant. New Year’s Resolutions? I have no idea about that, but I had three doughnuts for breakfast. Perfect jetlag cure. Art goals? Just keep on going, keep on drawing everything around me.

2010 was an interesting year for sure, and very full on art-wise. Some interesting projects, some interesting travels and of course the Portland Urban Sketching Symposium in the middle of it all, spurring the creativity of the rest of the year. We held a couple of great sketchcrawls in Davis in the Fall, and a third ‘Let’s Draw Davis’ crawl will take place on January 22 to coincide with the worldwide sketchcrawl. There are more fun things happening soon as well so I’ll keep you posted.

But for now I’ll just say happy new year, I hope 2011 is filled with fun and if you haven’t yet taken up sketching as a way to record your world, why not do so now? It’s so much fun! 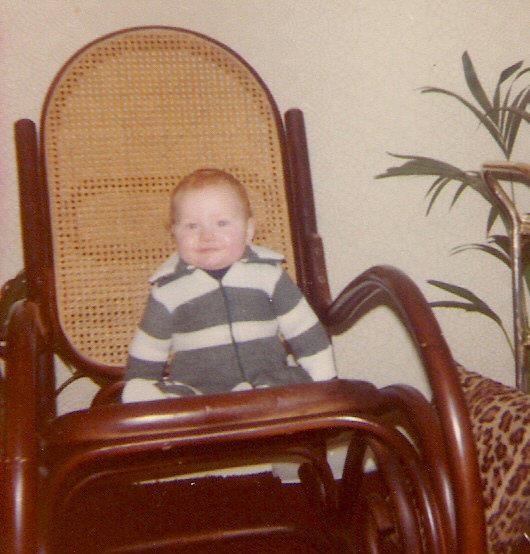 This is what I looked like on my first ever New Year’s Eve. Rather the lump I was. This New Year’s Eve, 32 years later, I look a bit more rough around the edges, but that is because we just arrived back from London, and a long and tiring journey it was. Gets more difficult every time. It is my son’s first New Year also, but he is thankfully fast asleep. I should be able to post a bit more regularly now I’m back in the US, after I’ve scanned the rest of my drawings from London and Belgium, but in the meantime enjoy your parties and your fireworks, I hope you all had an excellent Christmas, and I wish you a happy 2009. I’m off to bed.

Well, a hard rain fell. California is mopping up after a week of storms that brought floods, mudslides, power-outages and evacuations. Governor Arnie yesterday declared a state of emergency in seven counties, and even finally admitted that the levee system, which has suffered a few breaches in the recent storms, are in desperate need of repair. Both my TV and radio yesterday evening were interrupted by a peculiar (and incomprehensible) announcement warning of flash floods in Modesto and areas around Dry Creek. However, while many have been made homeless, everyone appears ready to admit that under the circumstances we got off pretty lightly. One weatherman said “we dodged the bullet – it could have been far worse.”

That wasn’t the only bullet that needed dodging over the New Year, however. The LAPD, among other police departments, issued a warning to people who follow the tradition of shooting a gun into the air at the stroke of midnight, saying they could face up to a year in prison. Shooting guns into the air! Can you believe this? Apparently it’s quite common in some areas. Have they not heard of ‘party poppers’?

At least it was dry on New Year’s Eve. The storms gave everybody a window in which to party, so we took the cue and stayed in with a couple of videos. At midnight, we switched to a channel showing the New Year festivities, and I was hoping to see a wonderful firework display in San Francisco, a concert in LA, hell I would have settled for some kids shooting their guns in the air in Sacramento. But what we got was the annual Time Square celebration, thousands of people packed into the neon dungeon, waiting for a large crystal ball to drop (but not break). I was disappointed; you probably think, what a grouch, but the thing is, it happened three hours beforehand, and the TV stations had the cheek to say it was ‘Live’! As if Californians do not realize that New York is on the other side of the country. Now New York is a great city and I wish them no disrespect, but is it too much to ask that we see an actual live event from one of the equally great cities in our time zone.

I resolved to write a letter to the TV stations to complain. “I don’t care how old Dick Clarke is, I don’t care if it is tradition…” I started to imagine myself as a revolutionary, leading the secession of the West away from the Empire States, dumping boxes of party-poppers into the San Francisco Bay in protest. Then sleep overwhelmed me, and when I awoke the storms were back, the flood warnings in place, and I realized I didn’t care that much about New Year’s Eve. “I can’t believe it’s 2006,” I overhear imaginary people saying. Well I can; I’ve had a year to prepare for it after all.