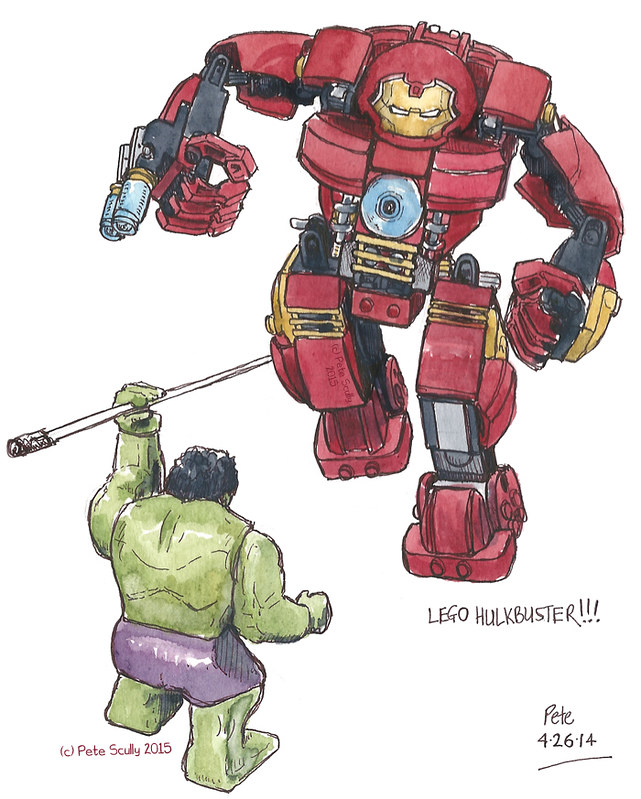 Lego. Everything is awesome. We very much live in a Lego Universe right now. Kipling couldn’t have put it better. “If you can keep your head when all around you are losing theirs…” I’ve been spending a fair bit of time drawing much of my son’s Lego (and some of it is mine – see Boba Fett and Magneto, naturally) which is nearly as much fun as building the stuff. Here are a load of the figures, which as any parent knows are way more important than the vehicles or dragons or giant robots they come with (except for the giant robots). There is a mixture of super-heroes and super-villains (both Marvel and DC, though Superman and Wonder-Woman have since been added to this collection), plus several of the Ninjago ninjas, plus a few other characters including Emmet from the Lego Movie you may have seen recently (it’s awesome, yes, if a little visually crazy, and it looks like my living room floor). I’ve included some of the accessories in this picture, Ninja swords and so on, and you may notice a little Wolverine-claws piece near the bottom. Sadly Wolverine himself was lost, we don’t know where (you know how Logan likes to just skip town), but his claws were left behind. I hope we find him. Big robots don’t just rip themselves apart, you know. Incidentally, did you see the last Wolverine movie? I really enjoyed it, Logan’s adventures in Japan. My wife pointed out though that despite his famous catchphrase, he definitely isn’t the best there is at what he does, because he’s actually not all that as a fighter: always getting shot or stabbed or cut, relying on his mutant healing factor and his adamantium-coated skeleton to get him out of trouble. It’s like saying, yeah I’m brilliant at chess, as long as every time you take one of my pieces I can just go back and do that move again. No, that ain’t how you learn. Still, all said and done, you’d still want Wolverine on your side, bub.

Another one from the book of my son’s ‘things’, this is his Iron Man toy, or more specifically Mark 42. This is a favourite. Of course, I have been attempting to make Iron Man costumes (to fit a five-year old, not for me, not yet) out of cardboard, with varying levels of success. A project I will be working more on. I have cardboard, duck tape, little LED lights, fasteners, paint and velcro. So far, Mark 42, Iron Patriot, and I have plans for the Mark 7 (when I make my own, it will be Silver Centurion, oh yeah). This one however can talk. It is very cool.

After a Saturday morning of making pancakes, watching football, playing superheroes, Cars Monopoly and Play-doh, I went downtown to watch Iron Man 3. I have spent a lot of time lately drawing different Iron Man armours for my son to colour in, so was looking forward to watching the movie itself. So was everyone else in Davis it seems; the show I wanted to go to was already full, so I got a ticket for the next one and went off to do some sketching. It was too hot to sit outside (90s; I know, in a couple of months that will sound chilly) so I popped into the University of Beer, a newer bar in Davis devoted to all types of beer, and drew the bar. I should have drawn the wall on he right as well, which is covered in colourful beer signs, but this is all I had time for. I went off for a curry for dinner, and then off to the movie, which was fun, and long.