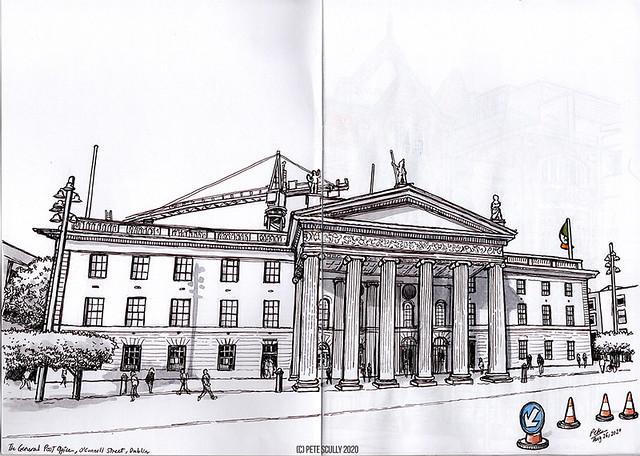 Earlier this year during the first months of the pandemic, Sheltering-In-Place, I decided that since there was no travel back to Britain this year I would do a virtual tour of the island, and that was a fun and enlightening journey. I wanted to do another virtual tour, maybe of France, but the thought of it overwhelmed me a bit (the planning, fitting all the places into a certain number of pages, and pretty much everywhere in France is sketchworthy) so I picked up a much thinner sketchbook a mate gave me last year from Dublin and decided to do a shorter virtual tour around Ireland. This quickly became limited to just Dublin (there are only fifteen spreads in the book) as the paper was very thin, too thin for watercolour, and I knew I’d need to add a bit more paint to the Irish countryside. Well, mostly green, and probably grey for the sky. But a trip around Dublin, well that sounded pretty grand. My mate who gave me the book was in the process of moving to Dublin while I drew this, so I was thinking of him at the time, but also of my own family history, most of whom came from Dublin, from my grandparents’ generation backwards (3 from Dublin, 1 from Belfast). I still have loads of family in Dublin, the vast majority I’ve never met or know anything about, except for my great aunt and a couple of my mum’s cousins I met when I was a kid. I only just recently learned about the family beyond my nan’s generation, when my sister dug a bit further, finding out some very interesting things about great-great-grandfathers with big General Melchett moustaches. Nothing too exciting, just regular Dubliners going back years. We just didn’t really know much though, people didn’t talk about the past. It was a fun bit of discovery, but Anyway, let’s start this Dublin journey off with that most important of Dublin buildings, above: the GPO, or General Post Office, on O’Connell Street. The first time I came to Dublin in 1988 this was one of the first places we came to (right before going to eat at Beshoffs, which I’ll never forget because I poured sugar all over my chips and got upset). I knew about the 1916 Easter Rising – hard not to, I was brought up on the rebel music – and this was the epicentre, the headquarters of the rebellion it was here that Pádraic Pearse read out the Proclamation of the Irish Republic. So, a good place to start, but we had a lot of city to cover, in no particular direction. So let’s set off around Baile Átha Cliath. 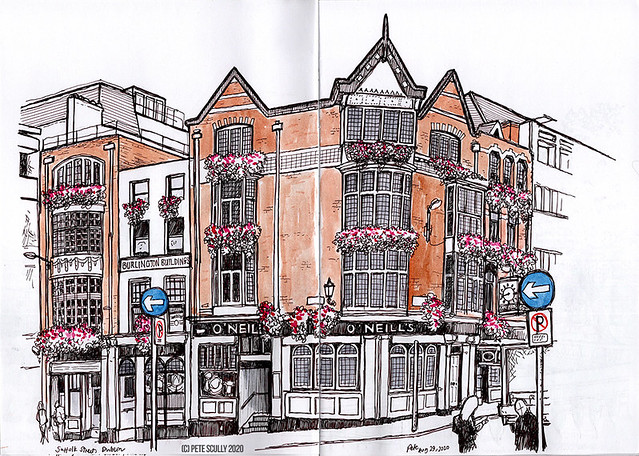 We move down across the Liffey to the corner of Suffolk Street, Church Street and St.Andrew’s Street, to the huge O’Neill’s pub. I’ve never been here but I like the look of the building. This was the page that convinced me I wouldn’t be adding paint to any other pages (though I gave it a go one more time). You’ve got to draw pubs in Dublin. If I should come back I’d mostly be doing that. In fact I’d go when it is most likely to rain so I’d have an excuse to go to more pubs. I hear the rainy season is shorter than people say though, it’s only from August to July. (I got no problem recycling jokes from my London tour bus days, feel free to use that for whatever city, Manchester, Portland, Brussels). This one is near the Molly Mallone statue. Molly Mallone wheeled a wheelbarrow through streets of all different widths selling coppers with muscles from Hawaii Five-O. 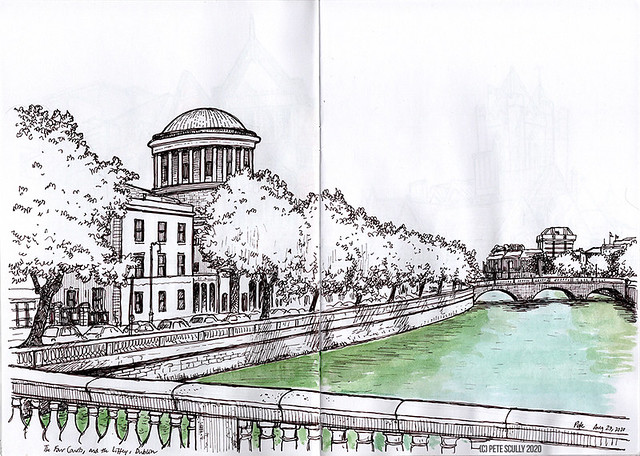 Here is the river Liffey, with the Four Courts along the north bank. The river isn’t green, it just appears like that in with the trees reflected in it. It’s not been dyed like that one in Chicago does on St.Patrick’s Day (is it Chicago, I don’t know, or care). Also, it’s just green paint on thin paper. The Liffey (An Life in Irish) flows from the Wicklow Mountains, curves around a bit and ends up in Dublin Bay. Dublin is centred on the Liffey and has some lovely bridges, the most famous being the Ha’penny Bridge, the iron footbridge which I did not bother drawing because it’s difficult and I couldn’t be bothered. I’ll draw it in person maybe if I go there unless it’s raining in which case I shall be in the pub drawing people playing bodhrans. Last time we were in Dublin my wife twisted her ankle on it. The bridge you can see is called the O’Donovan Rossa Bridge which is from the 18th century. I remember a fountain/statue that used to be on O’Connell Street called the Anna Livia which represented the female embodiment of the River Liffey, my great-aunt told me they called it the Floozie in the Jacuzzi. It’s moved somewhere else now. 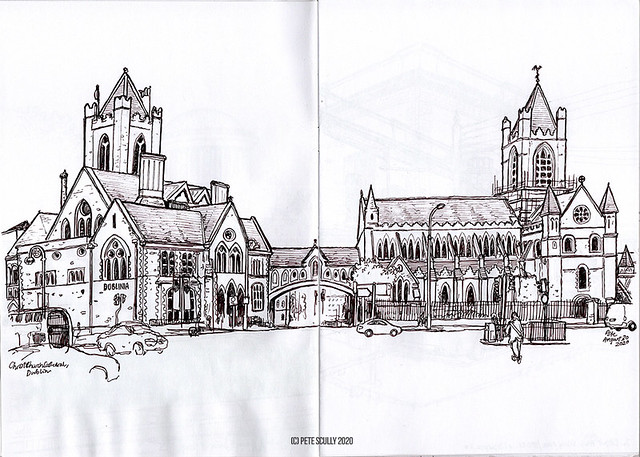 And this is Christ Church Cathedral. We stayed in an apart-hotel near here last time we were in Dublin, six years ago, and went to the Dublinia exhibit located in the big section to the left. That was a lot of fun, learning about Dublin’s Viking history in particular. There’s a lot of Viking in Irish history, my great-uncle Albert Scully used to tell me that the Scullys had Viking origins, but I don’t think he really knew, but it would explain why I read so much Hagar The Horrible when I was a kid I guess. I did love Hagar. Sorry, Hägar. And Helga, and Hamlet, and Lucky Eddie. They did that advert for Skol on TV where they’re all singing Skol-Skol-Skol-Skol but Lucky Eddie doesn’t know the words. That might be where the Scully name really comes from, people singing Skol-Skol-Skol. Skol is actually from the Danish for Cheers, skål, though in fact the beer originated in Scotland. This is really off topic now. By the way I am aware that ‘Scully’ bears zero relation to ‘Skol’ but it doesn’t stop Americans mispronouncing my name to sound like Skol, or mis-spelling my name with a k despite seeing my name spelled with a c literally all the time. It comes from “O Scolaidhe” meaning “scholar”, and like so many Irish names has one of those nice little shields you can get on keyrings in gift shops all over Ireland. My family names are pretty common Irish names: Scully, Higgins, O’Donnell, McIlwaine (that’s the branch from Belfast), plus there’s Barrys and Kennedys and Crokes and Byrnes and more in my siblings and cousins families, plus who knows what. I do remember going to Rock of Cashel (the ancient seat of the Kings of Ireland) when I was 12 and being stunned to find so many graves bearing the name of Scully, along with the big Scully Cross, which is more of a pillar these days, because the top of it was blasted off when struck by lightning in the year of my birth. Moral: don’t make a Scully cross?

Join me next time for part two of my virtual Dublin tour, when we visit another pub, a publisher, a campus, and I dunno, another pub.