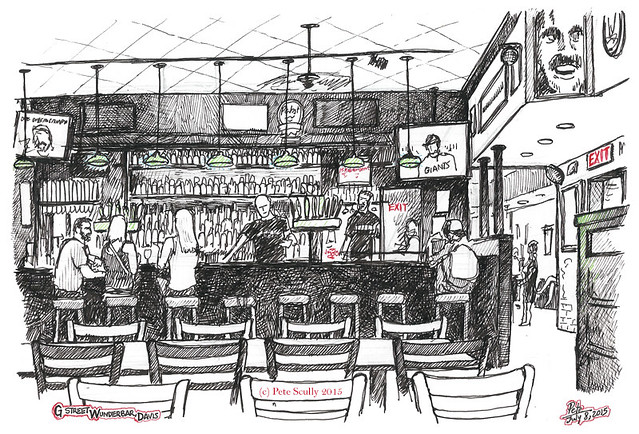 Last month I decided to get out one evening to downtown Davis and sketch. I haven’t sketched in the G St Wunderbar for a few years so I wanted to give it another go. It wasn’t very busy (because it was early), and I sipped a beer at the back of the bar and ran down the black Pitt pen I’d bought in Aix (I don’t use them very often, the nibs wear down too much after like one or two drawings), but I wanted to do some crosshatching, and play with sketch 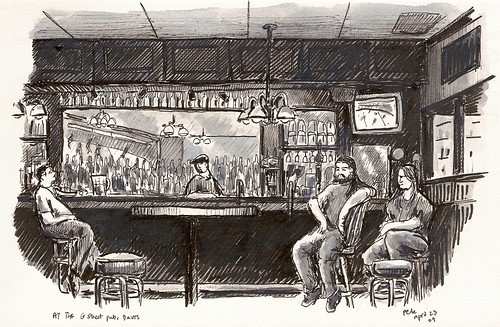 ing light in dark interiors. I’d thought about sketching the room at the other side of the bar, full of pool tables, but there’s never a good vantage point for an urban bar sketcher, so I stuck to the main bar which had plenty of table space. “G St Wunderbar”… I first sketched this view when it was the plain old G St Pub. There it is on the right, a sketch from six years ago; I even sat in the same seat.

Last Thursday, after a four-day-yet-particularly-busy-and-stressful week, I needed to go out and draw something complicated, and have a couple of beers too. I hadn’t really sketched at the G Street Wunderbar since it ceased to be simply the G Street Pub a while ago now, so this place deserved a nice barside panoramic. There it is above (click on the image to see it bigger). There are a LOT of bottles behind that bar. I had to sketch them very quickly. Here is a detail:

It wasn’t that busy when I got there, but more people filed in as the evening wore on. Several bands were on the bill that night, so I had a bit of music to accompany the sketching work. I didn’t draw the barstaff or drinkers though, as they all moved abut too quickly for a sketch like this.

And here is how it looks in the Moleskine, if you’re interested. The pen is dark brown, uni-ball signo um-151. The whole thing took about three hours (or four beers). Next time I’ll do it in colour…

Here are my previous sketches of the bar when it used to be the old G Street Pub, when it had Camden Town-esque toilets which are thankfully no longer there. I’m slowly checking off all the bars in Davis. If you want to see them all, along with others from around the world, see my Flickr set ‘Pubs, Cafes, etc‘.

Remember when we used to use public phones? God, we were dumb! Putting our coins in, talking for a bit, putting more coins in, hunting woolly mammoth; it’s so much better now we live in the future with our iPhones and blueteeth and hoverboards. There is a living relic of this ancient past on G Street, complete with a ‘phonebook’ (which doesn’t even have a search box, and people have clearly been writing their names on it to try). I have been meaning to draw this for a while, so I drew it during the sketchcrawl on G Street last Saturday. This being a historic neighbourhood, I can imagine it being used by early farm settlers, gold prospecters, maybe even local Native American tribes (before the invention of the smoke-signal app, obviously). I drew this in the Stillman and Birn gamma sketchbook, with a Micron pen and Cotman watercolours, and it took a little under an hour.

On Saturday, after a week of storms and rain and puddles, the sun came out and so did the sketchers, for the latest “Let’s Draw Davis” sketchcrawl. There were fourteen of us in all, and we met at the corner of 2nd and G Streets. The location of this crawl was along G street, which is a historic part of old downtown Davis, and makes for some properly ‘urban’ sketching. I took a while sketching the above scene, that big old white building on the northwest corner of G and 2nd, chatting to folk as they passed by. One guy I spoke to was back in Davis for the first time in 40 years, having lived there in the late 60s and early 70s, and so I was interested to hear about how Davis was back then, as he was interested to hear how I felt it was now. Below, a couple of international sketchers (from Spain and from Iran), both sketching the ‘Froggies’ bar opposite.

Above, an interesting iron fence nearby to Ace Houseware, plus a fire hydrant on 5th and G and the brand new bank building opposite. I didn’t sketch quite as much as I would have expected (and there’s one sketch of a phonebox I’ll post separately because I want to say some hilarious things about phoneboxes), largely because I was getting a little frustrated with my Micron pens, which don’t like the Stillman & Birn paper as much as I might have liked, at least not in the way I use them. I felt like I was wearing them down much more quickly than usual. Still it was good to get out and draw stuff, and I was amazed at how productive some of my fellow sketchers were. We all met up outside the Davis Co-Op at 3pm (which in hindsight was a long way to go for a fairly short sketchcrawl), and checked out each other’s books, which is always one of the most fun parts of the day.

Sketchbooks at the end of the day...

To see some of the other sketchers’ work, please go to http://www.flickr.com/groups/letsdrawdavis/, the Flickr group. The next Let’s Draw Davis sketchcrawl will be in May…date and place to be determined. If you can’t wait that long, this coming Saturday April 21 is Worldwide Sketchcrawl #35, in which hundreds or maybe thousands of sketchers across the planet will get out and draw their cities, and it sounds like there will be one in Davis too (I might make it the tail end, as I’ll be going to Picnic Day before that).

In the meantime, you may like to know we now have a Let’s Draw Davis page on the Davis Wiki, set up by fellow long-time Davis sketcher Pica (who produced the amazing accordion sketchbook above).