As you may know, I like football. My team, miles above anyone else, is Tottenham Hotspur. however ever since I was a kid I’ve always had a soft spot for FC Barcelona. Back in the 1980s, my favourite striker Steve Archibald went there, and a couple of years later Gary Lineker (a hero to a ten year old) signed for them too. I loved their simple stripes, and was always in awe and disbelief when I would see pictures of their stadium, the Camp Nou (or Nou Camp as it was sometimes called). I used to get butterflies coming into White Hart Lane as a kid, seeing all those people, hearing the roar, back before it was all-seater and when the stands were much smaller. The stands at Camp Nou however, they had three tiers. THREE TIERS! Wow, that must feel like the stadium goes on forever! I always wanted to go there, and so I would occasionally follow them growing up to catch a glimpse of that enormous stadium with its roaring crowd and its three tiers. Barcelona were special, refusing to have any sponsorship on their kit until only a couple of seasons ago, and being governed primarily by and for the fans. This was a proper club; no, it was more than a club. That is their motto, més que un club. I liked Italian football too and particularly liked Sampdoria (it was their unique shirts, plus Mancini and Vialli), so the 1992 European Cup Final at Wembley, when it was still the proper European Cup, was one of my favourite non-Spurs-related matches. Barcelona wore an orange kit, and changed into the home kit for the celebration at the end. I used to go down to Soccerscene on Carnaby Street and find those two kits and just look at them, feel them, dream about pulling one of them on and walking out at the Camp Nou. Of course, that all paled next to my love of Spurs, but it’s been a lifelong ambition nevertheless.

Cut to 2013. If I was going to Barcelona, I was going to the Camp Nou, goddamit. On the second day there I put on my 2012-13 Barça shirt, took the Metro out to Collblanc (after another massive chocolate-filled pastry), and paid my money for the ‘Camp Nou Experience’. It isn’t cheap, but this is the Camp Nou! They need that money to buy Neymar. There were a lot of other people there, so the museum was pretty crowded. There was an enormous trophy cabinet stretching the whole length of the museum, which may well have been even bigger had Franco not bombed the stadium during the Spanish Civil War and destroyed many of the cups (lots were saved by a quick-thinking employee). The entire history of the club was on display, from its foundation by Swiss immigrant Hans Kamper (aka Joan Gamper), who chose the ‘blaugrana‘ colours based on his team FC Basel back home, through the days of repression by Franco, through the period of the legendary players Kubala and Cruyff, through the ‘Dream Team’ of the early 90s, right up to the modern super era of tiki-taka, Messi and the Champions Leagues. A special cabinet was made for the four European Cups (the three later ‘Champions League’ trophies are slightly bigger than the first 1992 cup), and there was another special area devoted to Lionel Messi and his ballons d’or and golden boots. I couldn’t sketch too much, being crowded by so many people, but also there was so much to see I just wanted to see it all.

I toured the stadium, taking the stairs up up up to the top of the highest tier, and back down again. I came out and looked at the stadium, as impressive as I’d imagined it, though not filled with supporters and noise. In these days of super stadia, the Camp Nou still felt like a huge cauldron of magic. I sketched as best I could, as hordes of young kids on outings, some not much older than my own son, made noise and threw bottles and things all around me. I didn’t mind, and they all left me alone to sketch, in fact they were kind enough to take pictures of me holding my sketchbook afterwards. There I am look, one happy sketcher. Lifelong dream of visiting (and sketching) the Camp Nou – check. 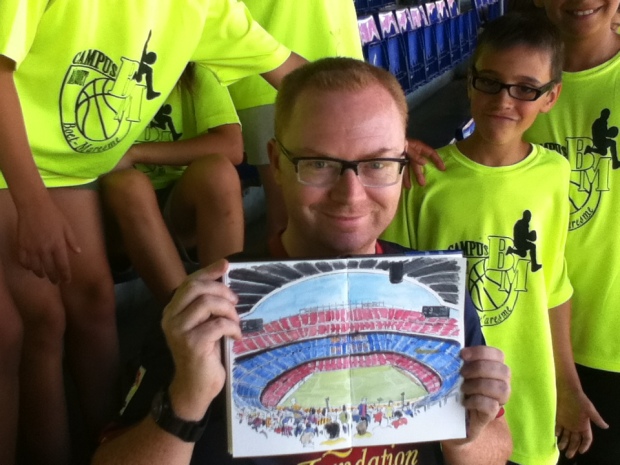 Another room featured a massive interactive area where you could see video clips of goals and events from all of the club’s history. I saw a great Lineker hat-trick vs Real Madrid, the moment where Maradona had his legs sawn off, Archibald knocking one in against Juventus, Messi’s first match, Iniesta with more hair, the 2006 vistory over Arsenal, and of course, the thunderbolt free kick by Ronald Koeman at Wembley.

I didn’t get one of those cheesy photos they offered of me lifting the Champions League trophy. I’ll do that next time. I did spend a great deal of time in their two-floor superstore, the FCBotiga, Before I knew it, it was well after three o’clock, and I’d somehow managed to spend all day there. There was still a lot more sketching to go that day, surely! And this was all I’d managed. I didn’t mind. I’d finally been to the Camp Nou.