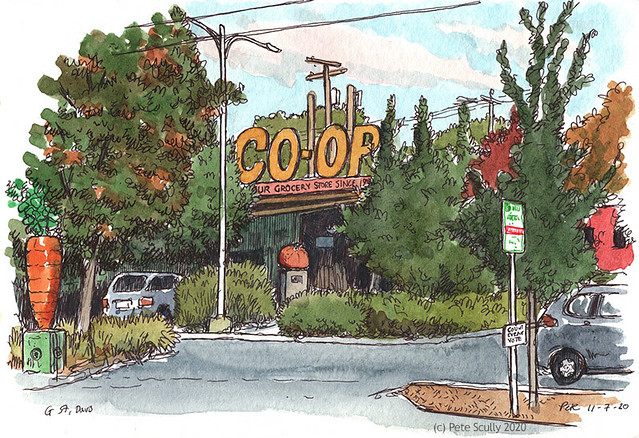 On the day the winner of the election was announced and made clear to anyone who understands elections I popped out to do some drawing and catch the last bit of sunlight on a pretty well sunlit day, before heading back with some beer and cheese to watch the speeches. The Davis Co-Op on G Street has been here for decades, they have a great selection of food and drinks, especially their beers and wines. I stood across the street and made sure I included the sculpture of the big orange carrot. Maybe the Co-Op made me think of the new administration-elect’s calls for co-operation. It also made me think of the incumbent wotsitsface who may or may not be attempting a Co-Up. Drawing calms me down from thinking about politics and the sheer 2020-ness of 2020. I don’t draw the Co-Op very often, for some reason I find it a tricky subject, maybe it’s all the trees in the way, maybe I need to stand or sit closer. Wow, is it mid-November already? The hardest thing I’ve found about this year is the impossibility of planning for anything. Thanksgiving and Christmas are coming up, and thinking about the family gatherings with all the distancing is tough. And it’s nearly make-the-advent-calendar time of year! I’ve no idea what this year’s theme will be. Maybe a huge drawing of the house since we’ve spent so much time there this year, and we now officially own it. Off to the drawing board…

Here is a panorama of the corner of 6th and G Streets, Davis. You can click on it for a closer look. It’s mostly trees and a couple of buildings, the usual. Couple of roads, the odd mis-shapen car. I only sketch in three chords, plus maybe a minor chord, you know what you’re getting. I should draw streets in musical order, so that they make a song. Start with C Street, then F Street, back to C, maybe up to the corner of G and 7th, you get the idea. I sketched it on the last day of March when I was home alone for the weekend while the family was in Oregon. It was one where I decided on just a few colours, mostly because I was tired. I still love sketching panoramas. There’s the Davis Co-Op on the other side of the street.

Saturday was another hot day, but another day of sketching in Davis. We held the latest “Let’s Draw Davis” skecthcrawl, this time in old North Davis, outside the Co-Op on G Street. I don’t go to the Co-Op very often (I just don’t get over there, though I used to be a member) but I really like the place, and they have great seating outside for a group of sketchers to converge and start drawing Davis. I took as always the opportunity to draw some of the sketchers before moving on to the more architectural items. There were about twelve of us total, a pretty good showing for what was going to be a hot day (about half braved it all the way to the end, where we met for a cold drink and ice cream outside Dairy Queen, a block away). It was fun chatting to other sketchers about sketching, materials, techniques, and I was excited to report all about Lisbon.

The Davis Food Co-Op is one of those beloved local institutions, fully owned by its shoppers, having grown out of a living room in 1972. Being completely owned by its members, it is another example of the way the Davis community works together, promoting sustainability, healthy living and education. It started out of a living room in the early 1970s, and is now a full-service grocery store. To find out more about the Davis Food co-Op, check out the FAQs on their website.

On the right is the clock that sits outside. There’s fellow Davis sketcher Allan (Numenius) sitting in front, I caught him in the above sketch as well.

Below, the Davis Food Co-op Teaching Kitchen. They offer classes in cooking here to people of all ages (including young kids). It’s right across from the Co-Op on G Street. This in fact is the last page of my eighth watercolour moleskine (though I still have several sketches from that book yet to post). This moley took only two months to complete!! Sketching old north Davis is nice as the leaves start to change colour. It’s still the height of summer, but as we get into autumn it becomes gorgeous around here. Fall is the best season in Davis, with clear sunny days and crisper mornings, but on Saturday it was getting into the big nineties so after spending about an hour sketching below, we went to the Dairy Queen to cool off and check out each other’s sketchbooks. Another great sketching day!

The next Let’s Draw Davis day will be Saturday September 17, on the UC Davis campus. The next after that will be on October 15; I am starting to plan ahead, and I have started a new website for information about the sketchcrawls (it’s still pretty bare, and will be an information site, rather than overloaded with blog posts): http://letsdrawdavis.wordpress.com. Check it out, and I’ll see you at the next one!