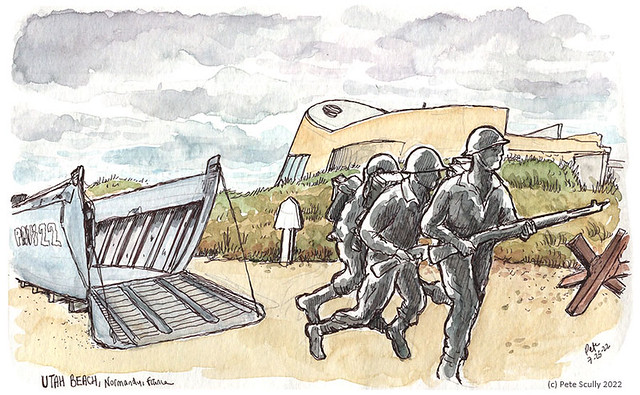 One of the other main reasons for wanting to visit Normandy was to see and explore Les Plages de Débarquement, the Normandy Landing Beaches. My son had been learning about D-Day at school since a couple of years before and had been fascinated by this period of history, and had been reading lots of of books and watching the films and footage. Early in the pandemic we all watched Band of Brothers (which was amazing, but very graphic) so we all started learning a bit more. Of course we all grew up knowing the story, and D-Day was celebrated in the UK every year on June 6th almost more than VE Day. In 1066 the Normans sailed across the Channel (no mean feat by the way, it’s a treacherous body of water) to subjugate England; in 1944 their descendants made the return trip to liberate not only Normandy, or France, but Europe and the free world from the Nazis. One of the great moments in world history, bought with a great many lives. It was an on-off rainy day when we went, and we started out at Utah Beach, one of the more prominent of the landing sites, and one of the most successful. This was led by the Americans, and along with Omaha Beach this will always be a little piece of America in northern France. We arrived and walked out to the wide expanse of the beach itself, and it’s good that it was a more overcast day than we’d had. There was a statue of some soldiers disembarking from a Higgins Boat landing craft (I sketched above, with the Museum in the background. The Museum at Utah Beach itself (https://utah-beach.com/en/) was really fascinating and well worth a visit. I sketched the large warbird “Dinah Might”, a B-26 Marauder, in the expansive hangar. I do love those old war planes.

Outside, I drew the Sherman Tank guarding the entrance. I didn’t have long to draw this so I did mostly just the outline and a few details and drew the rest on the plan coming home. So many details in those treads, they really were mighty little machines. I didn’t do any more sketching on our tour of the sites, due to time, but we still packed in a few more places on our way back to Bayeux. 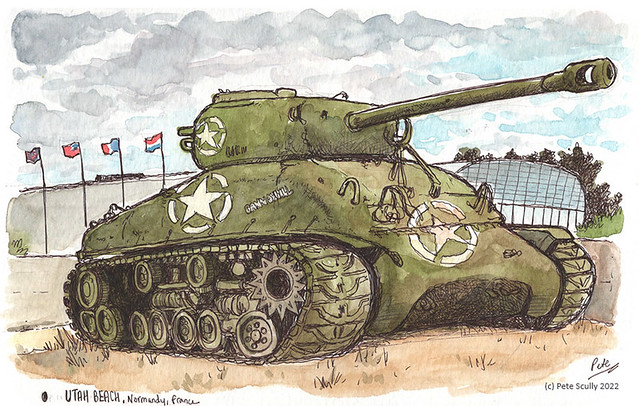 We drove through towns we knew from the history documentaries, Sainte-Marie-du-Mont, Carentan, Grandcamp-Maisy, imagining what it was like during that horrifying time. We can’t imagine it. We went on to La Pointe du Hoc, a high point jutting into the sea on the other side of the river mouth to Utah Beach, full of German bunkers and artillery that saw a famous battle on D-Day, a victory for the Allies led by the US Army Rangers. We went on to Omaha Beach, a name that brings a bit of a chill. The other main US landing point, Omaha looks like a beautiful place today, but saw some of the most terrifying fighting of the landings with thousands of soldiers killed. Nearby was our next destination, the American Cemetery, at Colville-sur-Mer. This was incredibly moving, I knew it would be but to be there among all those pristine graves, all those names of all those young soldiers, stretching out for what feels like miles, it was overwhelming. 9,388 people are buried there, of which 307 are unknown. The bugle from a memorial service echoed over the stones, and the rain switched on and off. We moved on to Gold Beach, at Arromanches-les-Bains, which was the main landing point of the British forces, spent a bit of time around Arromanches itself, and went up onto the cliffs to see some of the memorial spots. You could still see the artifical harbour installed by the British troops on D-Day to faciliate the landings. We had an ice cream and looked out over the channel.

We started toward Juno Beach, the main Canadian forces landing point, but the day was getting late so we headed back to Bayeux, which was very close by. That was a day of seeing some of our most important history spots, for sure. We left Normandy the next day for Paris, but we left wanting more, there is a lot more to see and learn about in this part of the world, and it feels like it’s all our history.