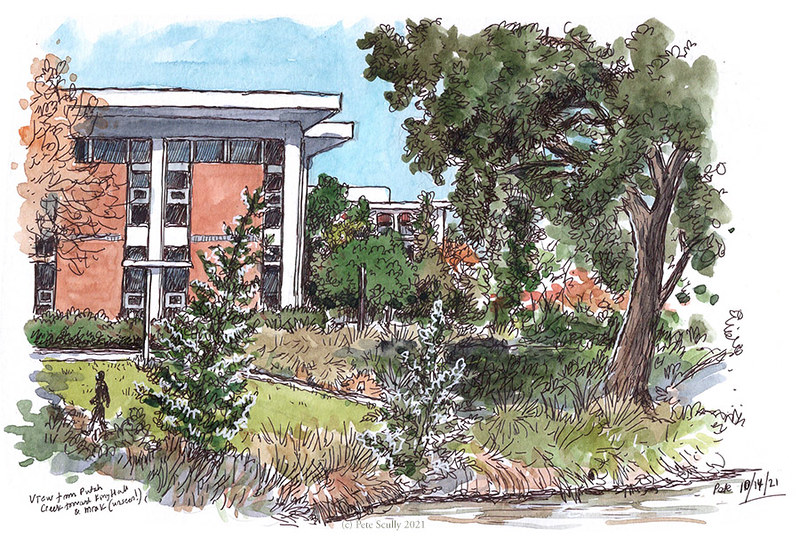 This is another lunchtime sketch from the UC Davis campus, this time down at the creek in the Arboretum, looking towards King Hall and, well, Mrak Hall, back there somewhere. You can just about make it out. It has been a while since I drew from this shaded path by the water, but it used to be a regular sketching spot for me, and I’d come back every year to draw as the scene changed. It looks a little bit unrecognizable from the very first time now. Believe it or not, the sketch below was drawn from the same place, over fourteen years ago. Obviously my drawing style has evolved a bit since 2007 but you can see how much things have changed in this view. 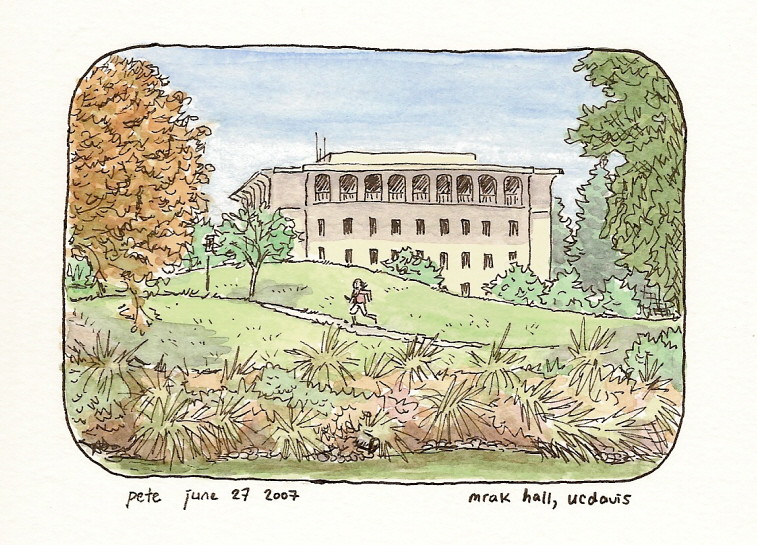 I know, I do a lot of these types of posts. Here’s a drawing of somewhere on campus, and here’s what it used to look like years ago. I never imagined being here this long. I’m not sure what I imagined back in 2007, but here we are still in Davis, tracking the changes. And for those of you “why don’t you put people in your sketches, blah blah blah” folks, look, there is one person in each of these two drawings, although the newer one is more of an anthropomorphic scribble. It’s probably not the same person, but maybe it is, after all, I am. They have gone from jogging along that path to walking across the grass, into the shrubs. I’m still drawing into a Moleskine, trying to interpret the world into ink lines and watercolour blots. 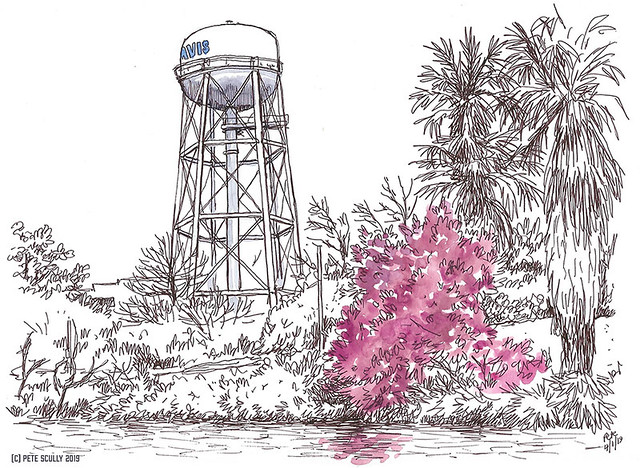 I still have some March sketches to post (a go-go-go sketchcrawl in Sacramento in an accordion book, and a relax-relax-relax vacation by the ocean in Huntington Beach), but it’s April now. Here is my first sketch of the month. I went down to the Arboretum and sketched the redbuds by the creek, and then went for lunch. April is here, and I have a few months before the summer travels. Belgium and Holland await. There are sketchcrawls planned – several sketching events in Davis, and I want to do that sketchcrawl historical-hunt in San Francisco (I drew a map on Sunday), but I think more than anything I want to lose a few pounds, so April is easing-myself-into-a-diet month. It won’t be easy but I’m going to give it a go. And then when I get to Belgium, I’ll put it all back in chocolate, waffles, beer and frites. So I need to clear some room. Spring is cleaning time too, and I have to clear my yard, it’s gotten a bit out of hand. I already organized my clothes drawers (though my closet is full of football shirts, which by the way necessitate the dieting). Then there is the Art Materials Cupboard. That is eternally out of hand. I don’t know if it’s ever been in hand. It’s the cupboard that whenever I get it all out to reorganize, my wife always says the phrase “oh boy”. Spring cleaning though, it’s not like when I was a kid. My mum was really into spring cleaning. When the curtains and nets came down and that bright April sunlight would stream into the living room, when you could only smell furniture polish and Windolene, when book shelves were cleared for scrubbing and dusting, that was when it was time for me to sneak off to my friends house for a game of football. Of course I could not escape the Spring Cleaning, and my room, usually impenetrable, would have to be cleaned. This usually started with my mum throwing all of my things onto the floor, and then I would have to tidy up from there, and I remember it was a very satisfying feeling to hoover the floor at the end. Anyway, with this sketch I decided to keep it clean, just the watertower shading and the still bright but starting to darken purple-pink redbud blooms. 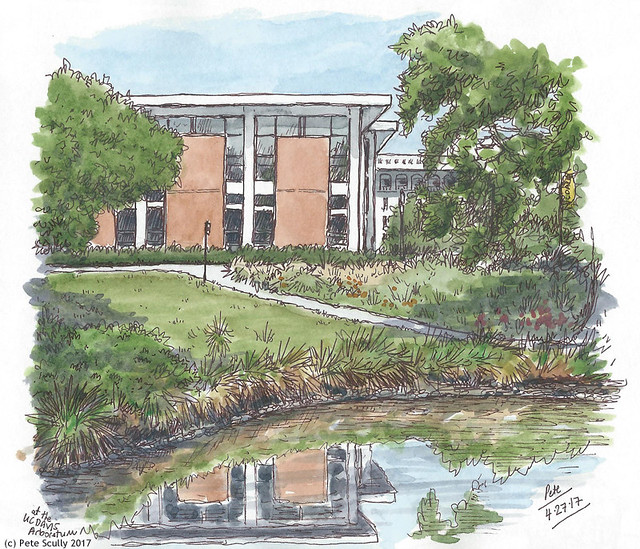 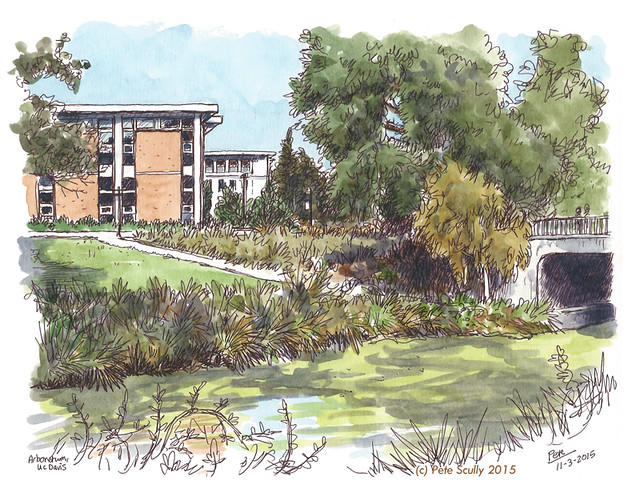 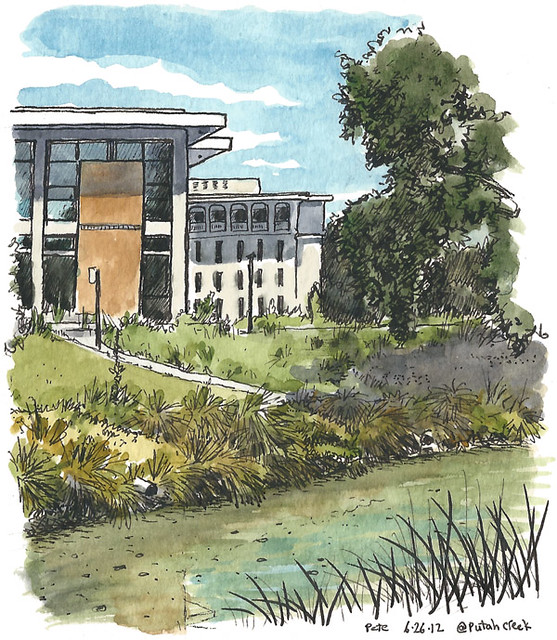 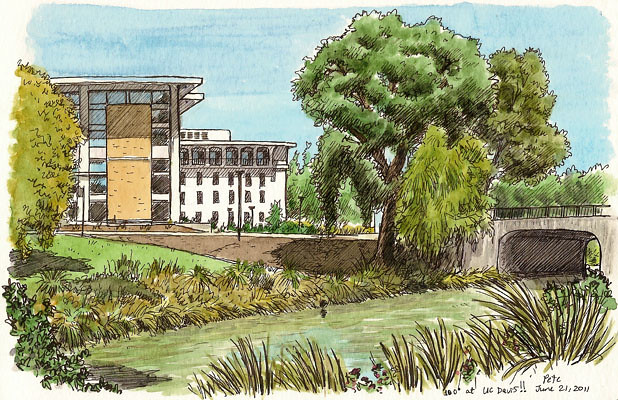 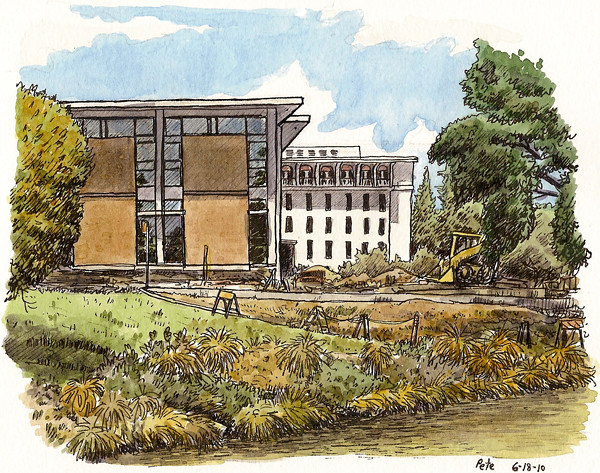 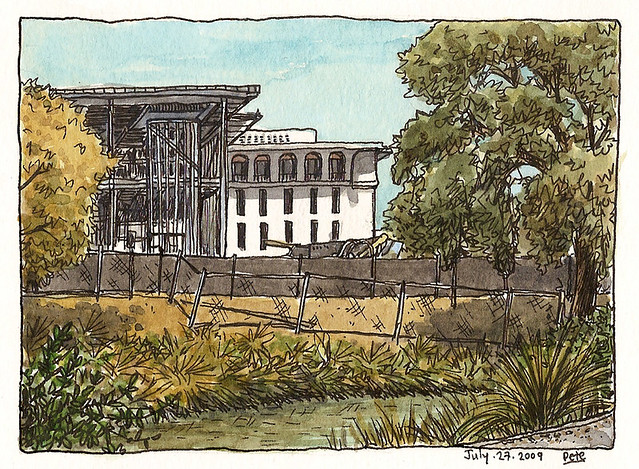 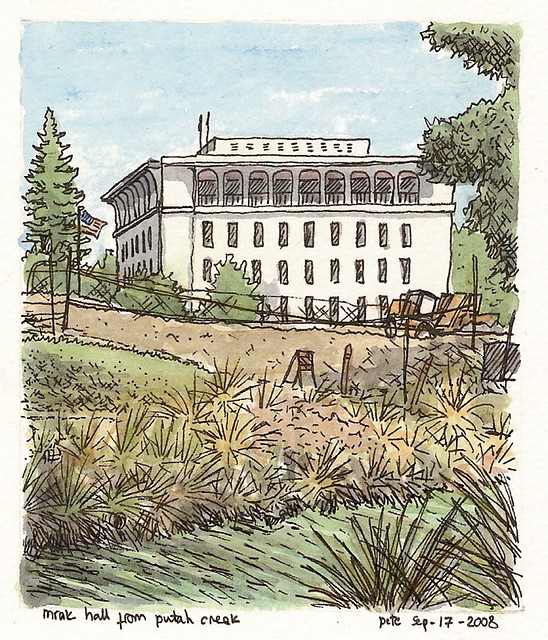 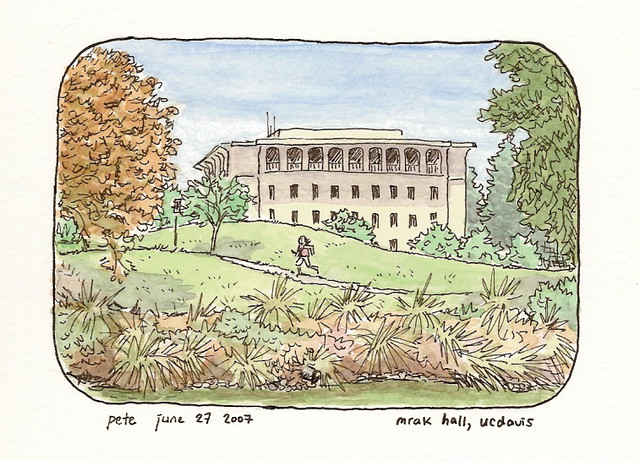 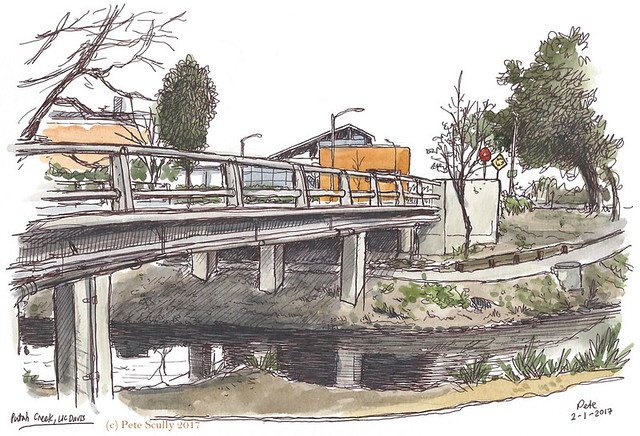 It’s February, the birthday month. I don’t really do a lot to celebrate, I don’t have parties or anything, don’t really have enough of a social circle for the sort of nights out I used to have when I was younger, now it’s more a quiet meal with the family, a pint of beer and some cheesecake. Now this sketch, done on the first day of the month at the UCD Arboretum about a minute from my office, was not meant to be metaphorical of  birthdays but in that great way you can retrospectively attach meaning to anything, this is a bridge, signifying crossing from one time to another. Weak I know. On the far side though is the Robert Mondavi Institute of Food and Wine Sciences, which includes the Beer lab, so I supposed that signifies celebratory tipples in some way. There is a STOP sign, which must mean I need to stop and assess myself, and there is a yellow sign for a roundabout, which of course as we all know signifies the Circle of Life, obviously, that one’s obvious. The path, well part of it falls into shadow which of course means the path is not always clear, and then of course there is the Creek, and that one is easy, it signifies my creaking body as I get older each day. I had no idea there was so much semiotic depth to my sketches! I wonder what all the fire hydrants mean? Actually don’t answer that.