It feels like ages since I did drawings of Davis, I have been drawing so many other places lately. More than a month in fact. So I thought I’d make up for it. It was very sunny this week. Well, during the daytime obviously, I mean at night it was dark. It was pretty cold too but is getting progressively warmer; these Californian Januarys, eh! So I got out each lunchtime and sketched.

On Wednesday I sketched near the Silo, by the newly renovated Hog Barn (or Pig House, or whatever it is called; presumably it was renovated after the big bad wolf blew it down or something). No hogs here now though. There are cows not far from here though. Davis is well known for its cows. Scientists do experiments on them. Some of them have windows in their stomachs (please, no jokes about beef curtains, this is a family site).

I had a hole in my shoe once. I used to tell people it was a window to my sole.

On Thursday I went downtown, and drew a house I’ve drawn before, I believe it is some sort of dentist’s surgery on E Street. I drew it in sepia about a year and a half ago.  Theres’ that tree look, in the foreground as usual, and it managed to keep itself within the frame this time.

Here’s the older version. I don’t mind drawing things I’ve drawn before. In a city this small it’s bound to happen.

And on Friday, to complete the triptych, I drew a frat house on First Street. Ths is right on the edge of campus. Most of the fraternity and sorority houses are.

Before I moved to an American college town I had no idea what frats were. All those greek letters, old boy’s clubs I guessed. Some frats are aparently older than the US itself. I met some American frat boys when I lived in France, I’d heard of their legendary alcoholic exploits (ah, no more than a typical night in any binge-drinking high-street town in England). They all start recruiting in the fall, having their ‘rush’ events and their ‘hazing’, and how the sororities have all these functions every night for a month whereby the wannabe entrants have to wear a different outfit each night or they are like so-out-omigod-who-does-she-think-she-is.

Yeah I’m glad we never had those sorts of things when I was at university. We had the student union bar, and some nights, oh dear,  it was not pretty.

Roll on the weekend.

This is the sort of drawing I love doing, so I’m pleased with how this turned out. This is the town square Hitchin, a market town in Hertfordshire that I visited while I was back in England in December.

You should go there, it’s lovely.

Spent this afternoon drawing more sketches of Luke; the top one was the last I did, and my favourite so far. His hair is a little darker than it should be but it’s from a photo; it looked that way. The ones below are also looking a little more like him. The copic pen and wash one is a bit too dark though, while the pencil one I think captures his ‘I’m busy playing’ look.

My son turned one today! We got him (another) toy guitar to rock out on (he loves guitars and is already pretty good at strumming a real one, for a one year old). He also got a lot of other very musical toys from his nana and his nanny, to go with the drum, guitar, keyboard, musical table, and maracas he already has. I think he might become a conductor, or a busker at least.  Daddy is still trying to draw him, but every time I get close enough approximation he gets a little older and changes – it’s a cliche but they really do change so quickly. I did the above in sepia micron 05 (nice for drawing faces with!!). Face is a little too long maybe, hair a little too dark. My art goal for 2008 was draw baby; I did, but not enough. My art goal for 2009 is draw more faces in general.

Ladies and Gentlemen, the 44th President of the United States, new leader of the Free World, Barack Obama. President Obama. No more George W Bush. Did you hear that? NO MORE GEORGE W BUSH!! Off you pop. No more Cheney. But thanks, by the way, thanks for the wonderful state you’ve left the world and the country in. Not your problem, leave it for the next guy.

Finally, someone intelligent running America. Though of course, he had to take his oath of inauguration twice, because he kind of fluffed it up the first time. Was I the only one who thought, when he paused right after the words “I will execute”, that he was about to slip up and say… “George W Bush”?

Martin Luther King Jr day, and so that meant no work. Was able to go to midtown Sacramento for a few hours in the afternoon (after birthday shopping for my son) to go to the art store and do some sketching around midtown, to catch some of those lovely shadows on the sides of the buildings.

The weather has been so nice, mid-seventies last week, high-sixties this, perfect sketching weather (don’t be jealous). Above, the building (monastic I think) on the corner of 26th and K. Below, the corner of 17th and I. I used my purple micron for this one, kind of embellishes the sunniness of the day.

And Tony Hart died! The gentle-mannered tv artist who inspired several generations (and had an unruly caretaker, I recall). Certainly inspired me, as a kid. That was sad news indeed, but he hadn’t been well. I wrote about him and his famous Gallery (from which no drawing may return) back in August. Farewell, Mr. Hart.

Some more drawings of Charleroi, done in uniball / unipin pens. Images of the old pays noir town. Do not adjust your sets. Even the football team play in black and white (allez les zebres).

Time travel doesn’t exist; it cannot exist. Don’t let any quantum physyicist tell you otherwise. And yet, in fact I did manage to travel through time, when I got on a train to Charleroi, my home between ’99 and ’00. I live on the other side of the world now, and was stepping back to take a look around at a life I used to lead. Now that is time travel.

Nothing had changed. Well, not nothing exactly; the shops were now open on Sundays, and there was a new little mini-supermarket right by to where I used to live (which would have been really handy back when I lived there), but otherwise, Charleroi was still the same: unpolished, post-industrial, and very familiar. This is not a tourist town; Bruges it aint, and all the better for 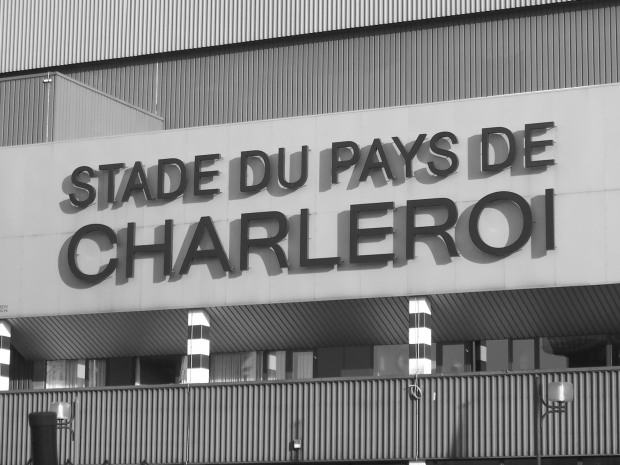 it. We had a classic Carolo night out; went to my usual places, rubbed shoulders with locals, had Kwak and Charles Quint at la Cuve à Bière (where the people are all the same as before), chatted drunkenly in the smoky Irish Times, staggered up to the excellent popular all-night friterie Chez Robert for a mitraillette de dinde (I am astonished I could still find it after all this time), and then a couple of Fanta Citrons in the morning for the hangover. The freezing cold sun helped too. While waiting for a train, I drew the picture above on tha banks of the murky Sambre (or at least most of it; the ink in my micron pen started complaining about the cold, so I finished it later). We walked about town, I wandered about in my memories and took plenty of photos, and drew La Vigie, the tall building where I used to live on the 13th floor when I taught at the U.T.

It was a fleeting visit, really (there’s not that much reason to stick around in Charleroi in the cold). Who knows when I’ll ever be back. I’m really glad I went though, and visited the increasingly-distant past, but it was even nicer to get back to the future.

Yohann Pelé, goalkeeper for French club Le Mans (who according to France Football wants a move to Angleterre), and my illustration friday entry for this week, theme being ‘pale’. Yes, Pale. And this guy’s name is Pelé, which is close enough, right? but it’s not that Pelé, it’s one who surely pales in comparison (oh please). Plus he’s wearing a pale blue kit.

I wanted to draw a footballer from my France Football paper (which I bought in Belgium; can’t get it here in Davis, but I accumulated a massive pile of them when i lived in France, best footy paper in the world). I wanted to do some sketching in pencil and coloured pencil, I was playing around with it, and I like it.

A few days after Christmas, a friend and I went over to Belgium, where I used to live what feels like a lifetime (but was less than ten years) ago. I spent a year in Charleroi between 1999 and 2000, my time there culminating with the now infamous visit of the chair-throwing England fans. It was a year that has shaped a lot of my imagination, though I did little but eat frites drowned in sauce, drink and learn about beer at la cuve à bière, and play the guitar (writing songs about this, about that). That is, however, the life. We took the early Eurostar to Brussels, and walked around the busy post-noel streets, surprised to find that there was no rain whatsoever – I nearly didn’t recognise it in the sunshine. I like Brussels. I drew at the Grand Place, crowded, touristy, disgustingly ornate, but necessary for a budding urban sketcher to draw. I wasn’t going to seek out the urban grit – we were going to Charleroi later that evening, and there would be plenty of that.

I stopped in a shop I loved when I was living there: Grasshopper, an amazing store that sells all sorts of toys and books. I wanted to buy some French board books for my baby son (decided not to go with teaching him Flemish just yet). However, while I was sketching, I must have put them down and forgotten about them (very unlike me*). I went back to the store and bought some more, and asked if anybody had returned them. Non, they told me, ils sont bye-byes. Yeah, cheers.  So, we took a very modern double-decker train south to the city of Charleroi, and while Roshan napped in the hotel, I ventured out into the freezing dark evening to do some night-time pre-pub sketching, and drew Le Luxembourg, a place which although very pretty, I have never actually entered. While drawing, I kept my eyes on the shadows for, er, shadowy people,  happy to be back in my old town.

*I do tend to lose things in Brussels, though. I lost my favourite top here once, in 1999. I wrote a song about that too. It was white with thin black hoops. If you find it, let me know; it might still fit.